I’ve spent most of the morning trying to decide what I wanted to say about the most pivotal moment in RahXephon.

If there is a single episode where the show turns from a sort of mecha show into something else entirely, it’s Episode 14 “The Boy in the Mirror/ Time after Time.”

I think I’m going to start with a misinterpretation of a 9th Century Zen koan attributed to Lin Chi. — “If you meet Buddha on the road, kill him.”

(Technically, it’s really a ch’an koan, which is the Chinese form of Zen.)

In my limited research and a lot of thinking, my understanding is that you should not think about the Buddha beyond yourself. If I can be indulged, you need to find enlightenment from within rather than to try and conceptualize what enlightenment means.

Honestly, the idea kind of makes my brain hurt. The wording is evocative though.

While I know it’s not the correct idea, I like thinking about how this comment applies to daily life. So much of how we define is determined by others. We are defined by our job, our income, where we live, who are parents are.

When we strip all of that away, what defines us? Are we just a collection of other people’s expectations or are there a collection of traits that are fundamental to who we are?

That is the question is at the center of this episode (and really the whole series).

The ways we define ourselves

Really there are three points in the episode I want to touch on to explain my thoughts.

The first comes after an argument between Major Sou Yakumo and the pilot Elvy Hadhiyat. The episode revolves around a new weapon Terra just received called the Vermillion, and Sou questions why Terra, a research institution, would need it.

I’ve already talked about how the Earth sees the Mu, so I won’t belabor that point other than to say that Elvy takes up the “Mu aren’t human” banner and Sou believes they are.

Trying to convince Elvy that the Mu aren’t different, Sou lets it slip that Ayato is a Mulian. While the audience has known this from episode 4, we’ve never really known what that means. We get a front-row seat in seeing Elvy’s entire opinion of Ayato change. He’s no longer “the boy we’ve kidnapped to fight for us,” he’s a dangerous enemy. 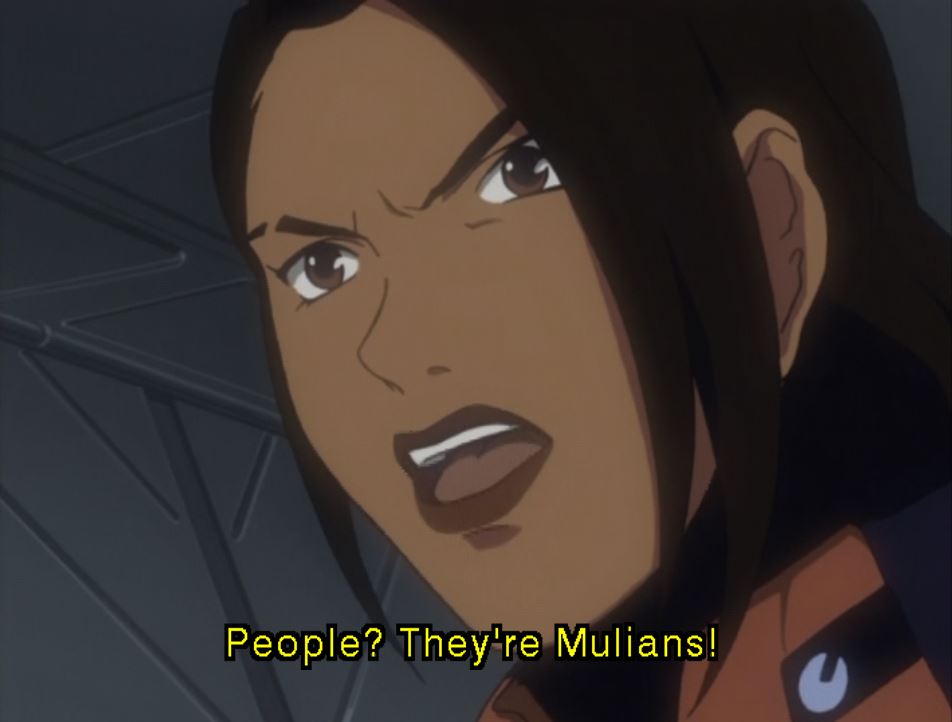 Of course, Ayato overhears this bombshell and goes running off. Sou finally finds him sitting by a pool staring at his reflection.

I’m going to quote the exchange here because it’s important:

Ayato: What in the world am I?

Sou: You are you.

Ayato: Was I the only one that didn’t know?

Sou: No. Only a few people knew about it.

Ayato: Really. And you weren’t laughing behind my back because I’m a Mulian and not human or were you just using me because I can control the RahXephon for you?

Sou: It’s pitiful isn’t it? (Ayato sighs) Not you, Ayato. I meant myself. Just pitiful. I don’t even have the spirit to smack some sense into that thick head of yours.

Sou: Where you come from doesn’t matter. What matters is being yourself.

Ayato: Why are you even bothering! Words can’t change anything.

Sou: They can when people talk to each other. That’s why I’m here because we’re all connected, and if you want to change anything, you’ll stay here as well.

The second moment comes after a dolem shows up (strangely enough at 12 minutes in), and Elvy goes out to fight it in the Vermillion. While Ayato doesn’t go rushing out immediately, he realizes that he might not define himself as a human, but he still defines himself as a protector. Through a series of actions, Ayato learns even this definition of himself is not really adequate.

He decides to join Elvy on the field of battle, and the dolem manages to trap them in a pocket dimension, and Elvy and Ayato begin arguing Ixtli tells Ayato that he must not “look into it” or he won’t be able to achieve his Yolteotl.

(Yolteotl is not just a made-up anime word. According to Wikipedia, it means “heart of God” or “someone who contains an almost spiritual creativity (an ‘enlightened mind’)”)

Ixtli uses the RahXephon to fire an arrow at the dolem, but the Vermillion was nearly in the path. This makes Elvy point the gun at the RahXephon, but before she can fire time rewinds.

While I don’t think this episode provides a satisfactory answer, I do think it provides a fascinating question. So many of the things that Ayato uses to define himself are labels other people apply.

He is a Mulian. He is the pilot of the RahXephon. He is part of Terra. While he might have accepted them, they aren’t who he is. In fact, while this episode doesn’t really touch on it, there have already been hints that the RahXephon isn’t even a weapon of war.

Between Sou’s comment that “You are you” and Ixtli’s warning that “he must not look into it,” the message appears to be that he can’t find enlightenment if he lets other people define who he is.

To again misuse the quote, he needs to kill the Buddha before him to achieve understanding.

What I’m left wondering is what’s left when you strip away all of the definitions other people give you? How much of what we cling to is of our own making and how much of it is of other people’s influence?

I don’t know that RahXephon provides us a clear answer to that question. Do my political beliefs come from an internal place or are they fed to me through external means? Does my job define me, or did I pick this career because it was the best fit for who I am?

And if RahXephon offered us an answer to this question, should we just ignore it?

Wouldn’t it just be another Buddha on the road?

What do you think? I’m still struggling with what Ixtli means when she tells Ayato that he must not look into it. I’m OK with my interpretation, but I certainly wouldn’t turn down another interpretation. Any thoughts?

3 thoughts on “If you meet the RahXephon on the road, do you kill it?”