I’ve been spending almost a week trying to find a way to explore the triangle that is Gendo, Shinji and Rei in episodes 5 and 6.

This 46 minutes are really Shinji’s and the audience’s introduction to his fellow pilot and where we get some more insight into her hero worship of Gendo.

The reason I struggled is that the story so obviously mirrored Gendo and Shinji. Fairly early on we learn that Gendo seared his hands to free Rei after Unit 00 went crazy. In a flashback we see him scream out and race down after her capsule is ejected. Along the way he sheds his glasses, which become her one prized possession.

Her infatuation runs pretty deep. She doesn’t care about her own well-being, her surroundings or her even own life. But when Shinji questions the integrity of his father she slaps him.

For a while I wondered if this was linked to Yui, and her ties with Rei. The problem is for the rest of the episodes Gendo doesn’t really care about her. She is allowed to live in a rundown apartment. He is willing to send her into battle bloody and bruised. His one moment of emotion seems weird in context.

On the other hand, we have Shinji, who does the same thing, but seemingly does it out of empathy. She had told him goodbye at the beginning of the mission. After burning his hands to free Rei, Shinji tells her to not say that she doesn’t have anything else.

“Don’t say goodbye when you leave on a mission,” he tells her. “It’s just too sad.”

When she sees Shinji crying she says she is very sorry and she doesn’t know what to do or feel at a time like this. 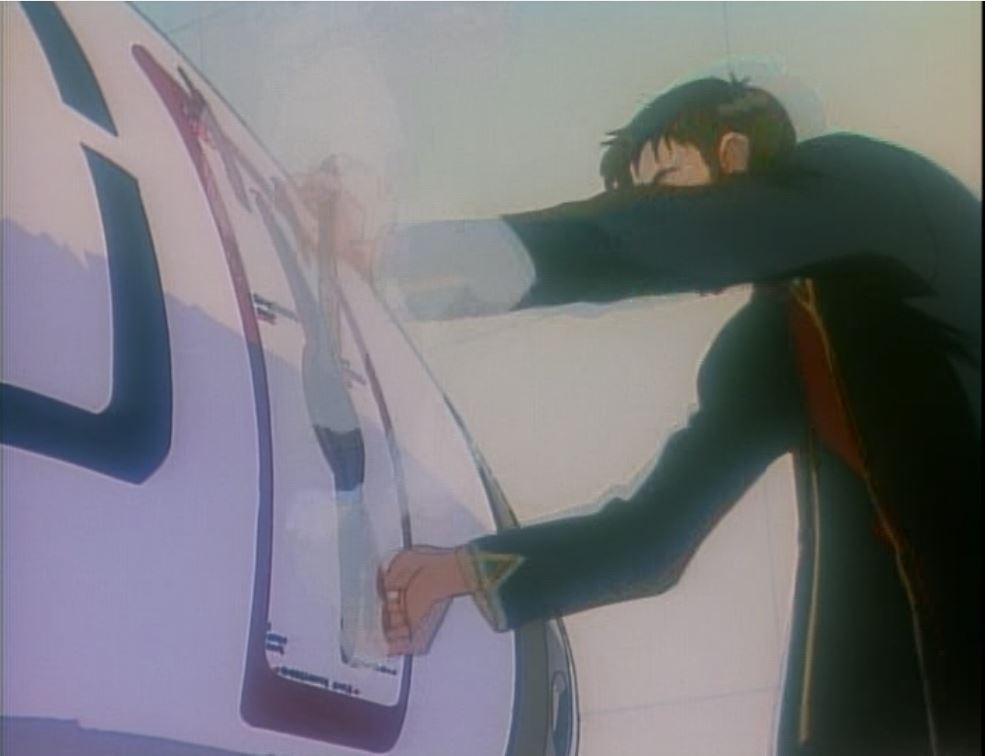 Rei smiles at Shinji at the end seeming to hint that she has warmed up to him the same way that she warmed up to Gendo, and I can only assume for the same reason.

The problem I was having is Shinji’s relationship to Rei is not the same as Gendo’s to Rei, even if they act the same. I mean they are both broken men, but they are broken for different reasons and in different ways.

So what separates them.

Well I found my answer in robots, or perhaps more specifically in androids.

Robots, androids and the human form

When I started thinking about this, I had an image of Detroit: Become Human in my head.

For the people who are unfamiliar with the video game, it’s basically follows the tale of three androids. In this world, they operate under programming that seems to prevent them from hurting anyone or disobeying people.

What ends up happening, in at least two of the stories, is that the robot breaks out of that programming and starts acting of their own volition. It’s not a particularly imaginative trope, but I think it’s important for two reasons.

The first is that these robots look human, but no one treats them like that. They get their own special section of the bus. They’re not allowed to go into certain stores. So in the world, people realize that they are not human, even if they look like it.

The second is that the robots look human, so we sympathize with them. If we were talking about the robot revolution, and they looked like Terminators, we (the audience) would not consider them equal. They might be superior, but they would not deserve the same level of respect.

Other shows and movies do play around with this, but it seems the most blatant in Detroit. The fear generated by the Cylons is something completely different, but utilizes a similar concept.

So there is a concept in psychology called a heuristic. They’re basically mental shortcuts that work well if you’re hunting for food in the forest, and they actually work in other situations.

One of these is that we tend to judge pretty people as more moral, and we tend to be attracted to the familiar. It’s easy for us to judge the Terminators as monsters because we know they don’t look like us.

The cognitive dissonance created by the Cylons is because we want to believe they are like us, but we as the audience know that secretly they’re monsters.

We don’t question whether or not an  android could be seen as on the same level as humanity. This is because they appear human. In a lot of ways these modern robot stories tapped into the stories of Pygmalion or Pinocchio. They ask if a woman or child of steel and circuitry can be made flesh and blood or at the very least be made equal to it.

(While I hate the payoff in that show, Chobits actually does address these ideas with a fair level of maturity.)

So what does this have to do with Evangelion?

Is Rei Ayanami a real girl?

So I’m going to spoil a series that is more than 20 years old. Rei Ayanami is a clone formed using genes from Lilith and Shinji’s mother Yui. She is a creation. It’s interesting to note that Asuka later refers to her as a doll.

As one YouTube video translated it, she is actually a ningyou. These hand-painted dolls are believed to take on a soul.

What is important here is that everyone except for Shinji is aware of this. So much like the androids in Detroit, everyone treats her like she’s less than human. Why would she be living in a barely furnished apartment in a crumbling building, surrounded by garbage, by herself?

As I was doing research on this, I kept coming across people saying that Gendo “objectifies” Rei. But I’m not entirely sure that is the case. I think before Shinji encounters Rei, she is an object.

But Shinji is different. When he sees Rei, she is a human. Whether that’s by mistake and ignorance or not, he treats her as an equal.

Shinji sees Rei like the audience sees the androids in Detroit. He keeps expecting her to react like a real person, but she doesn’t. When he falls on top of her, she isn’t mad. When she walks out naked, and finds him in her room, she doesn’t get upset about that. She’s only upset because he has her one prized possession.

So what we see at the end of Episode 6 isn’t really Shinji aping Gendo. We see someone reacting in empathy for another human being who has just expressed that she doesn’t care about her life.

Where Gendo was just making sure his property was intact.

10 thoughts on “Is Rei Ayanami a doll or a real girl?”