“We old folks have to teach you youngsters that that the sun will never rise over this city again.” — Big Ear, The Big O episode 5 Bring Back My Ghost

See, in the last post, I said the first four episodes of this series laid out one commandment for Paradigm City: Do not pursue the past.

Even if you’re doing it for the least selfless reasons, chasing what happened before or during The Big Oh… will only lead to pain and misery.

It’s important to note that this rule is not spelled out. What makes The Big O remarkable is that it avoids the pitfall so many other anime fall into.

See a lot of anime are built around a single rule. For example, Kenshin Himura can’t kill anyone. 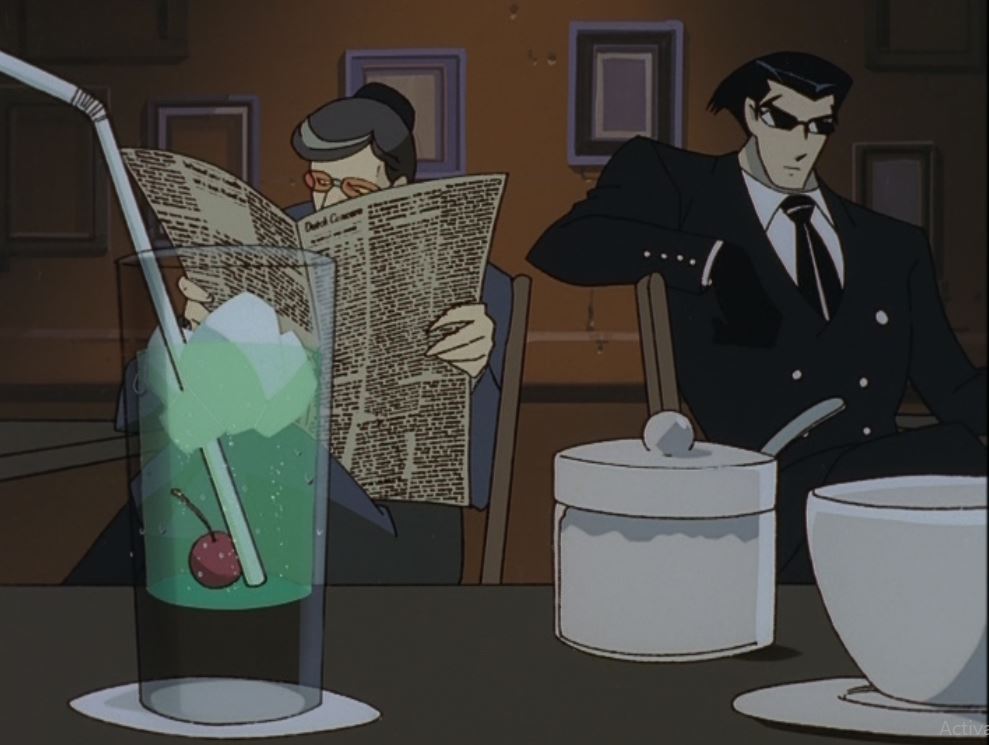 Of course, they find someway to avoid breaking the rule, or, in some cases, they break the rule and it becomes a completely different show. But either way, the audience is painfully aware of what the rule of the show is.

What is brilliant about The Big O is that no one tells you what the rule is. I’ve watched this series multiple times, and I never figured out what the one rule was. Does that make me obstuse? Sure.

But I didn’t need to know the one rule to enjoy the show. It’s never used to build tension. There’s never a question about Roger breaking the city’s one commandment.

That is why Bonny Frasier is so special.

But before I explain, I have to explain the plot of episode 5, titled “Bring Back My Ghost.”

Bring Back My Ghost synopsis

Bonny Frasier is the youngest son of an elderly lawyer who did “horrible things,” along with her other son, to make sure they lived in the richest part of the city.

Well Bonny, a young man filled with justice, decided he couldn’t live with that and went off to join the military police, because all he wanted was to make the city better again.

What he doesn’t realize is the military police are just as corrupt as this mom and brother are. Just as people living outside of the domes are going to clash with the police over a land grab, Bonny watches four members of the top brass shoot someone.

He’s in shock. He exclaims, and tries to run, but one or all of the generals shoot Bonny and dump him over the side of the bridge.

As he’s sinking, a giant robot hand scoops him out of the water. He wakes up knowing how to pilot the robot, and a desire to meet out justice.

Anyway, after he kills the last one, Big O shows up and destroys the robot. And Bonny lives.

This is the most important thing about this episode, is that Bonny Frasier, who has been using technology from the past, is not punished on screen for what he’s done. Sure he is going to get arrested, but he doesn’t die.

This is really important, because it means that Bonny Frasier seems to break the show’s one commandment.

The Sun Will Rise One Day

So I started this post with a quote from Big Ear, and it’s really important, because there is a mirroring quote later on in the show. When Roger Smith takes Bonny back to meet with his mother, he says, “I just want to show someone that the sun will rise someday.”
Ostensibly, he is talking about Bonny’s brother Rick, who believed his brother had been dead for a year.

Bonny Frasier was a man full of justice. He was a man who wanted a better future for the city and its people.

Paradigm City’s god is willing to grant people the power of the past, but only to build a better future.

So why is Bonnie Frasier so important? Because he shows what the force guiding Paradigm City wants. It wants people to pursue a future and chase a world where the sun will shine.

And that’s what makes this episode so darn brilliant. The creators have spent four episodes making a rule. Then instead of just trashing the rule, they make a character that seems to break the rule, but just adds another level of complexity to it.

AND IT DOES IT WITHOUT NEEDING TO EXPLAIN IT TO THE AUDIENCE.

This is the most important point of all. In a world of shows like Akame Ga Kill or even Kill la Kill, it’s refreshing to watch a show that doesn’t need to beat me over the head with its premise.

So cheers to you Bonny Fraiser. May you find justice in Paradigm City.

Notes: So this is the fourth in my series of posts about The Big O. The goal is to write through everything that I’m noticing about the show as I watch it. It’s a little more disorganized then I would like, but if you want to read more than here is what I’ve written so far.

Introduction: Batman, Art Deco Robots and Anime History. This is the Big O

Episodes 1 – 4: Welcome to the best post-apocalypse

This is the first of two posts focused on episodes 5 -7. I just finished watching episodes 8 – 10, which I’m still processing.

Thanks for reading. I hope you liked it, and if there is anything I could do better then let me know.

3 thoughts on “Thank you Bonny Frasier. The best character in The Big O”